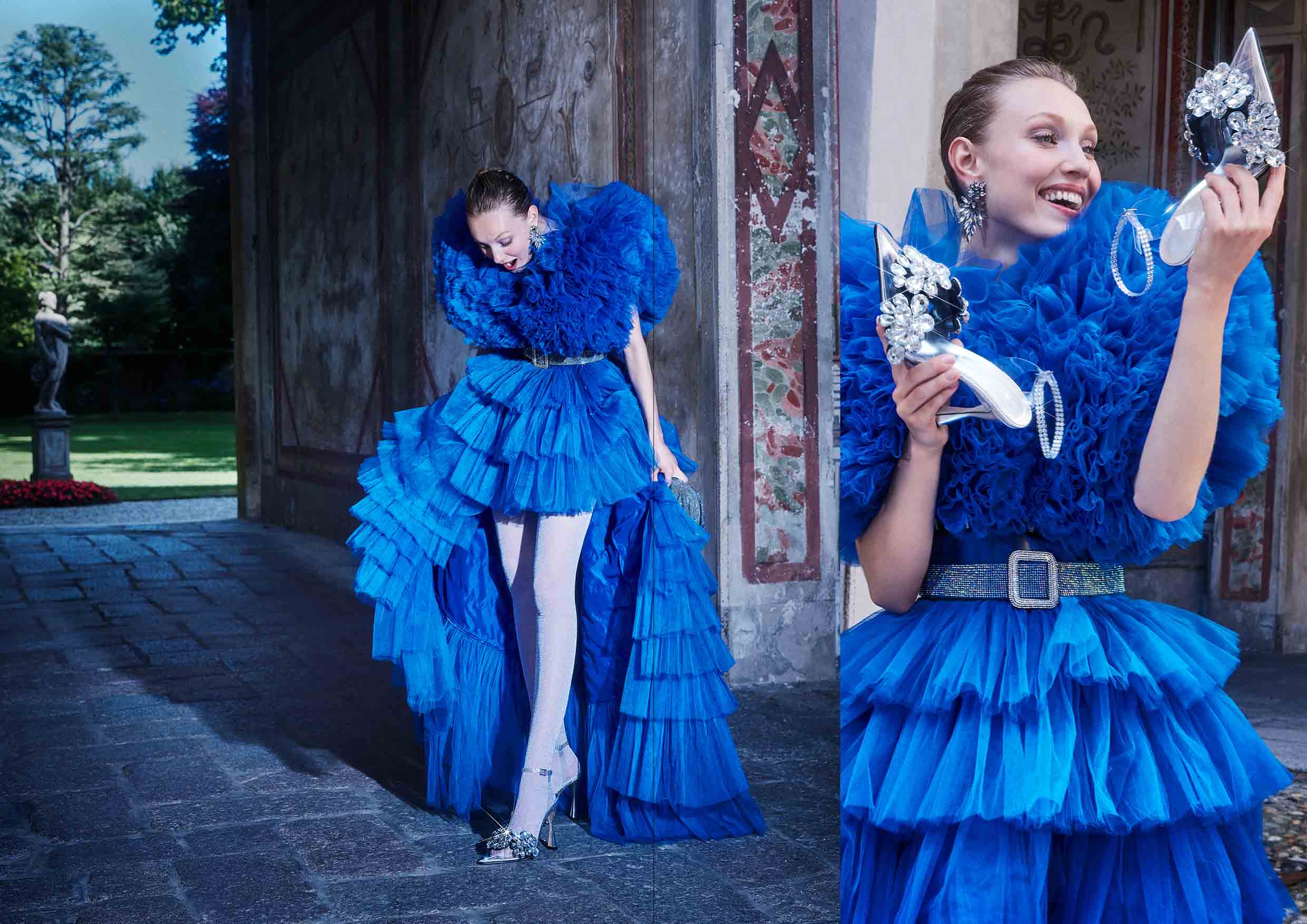 Success for the Micam Milano Digital Show with 100 brands from all over the world showcasing more than 250 collections and 15,000 products

A new chapter in the fabulous fairy-tale world of MICAM is about to be revealed: “Glamorous Magic”, the second episode in the #micamtales communication campaign, will accompany visitors to the coming edition of the international footwear trade show, due to take place from 20 to 22 February 2022 at the Fiera Milano Rho.

Shots taken by photographer Fabrizio Scarpa, and a short-film directed by Daniele Scarpa, draw spectators into the world of the protagonist who, after a disastrous attempt to create her own look for the Grand Ball, now falls under a ‘glamorous’ magic spell. Drawn towards a strange ray of light, the young girl finds herself in a garden where an enchantment awaits her in the form of a new party look and, particularly, a fabulous pair of sparkling, diamond-studded glass slippers, thus enabling her to fulfil her dream of becoming a princess. The shoes – object of desire for generations of women – were made exclusively for MICAM and pay tribute to the boundless creativity that lets us dream and create products that are both “beautiful and well- made”.

Glamorous Magic is part of the “Micam Glass Slipper” communication campaign, developed under the creative direction of MM Company with accounting by Laureri Associates. On top of the visual images, the campaign also involves visitors to MICAM Milano in a real-life happening: for the last two editions, in fact, visitors have been able to interact with the campaign theme in the area dedicated to it in the MICAM Tales Square, an event that was followed on Facebook by 40,000 followers with 54,000 interactions, and on Instagram and LinkedIn by 30,000 and 2,000 followers, respectively.

“Social media and digitalisation are essential levers for MICAM – says Siro Badon, Chair of MICAM Milano and Assocalzaturifici. The success, not only of the new means of communication but also of an innovative way of hosting trade-fairs, is confirmed by the positive results obtained by the MICAM Milano Digital Show – the platform that enabled footwear companies and buyers from all over the world to connect and do business without physical barriers. An event that is sustaining the footwear industry in the shift towards digitisation, and that proved to be invaluable during the pandemic emergency when it was not possible to travel, running alongside the physical event which remains indispensable for our sector”.

More than 100 brands from all over the world took part in the latest edition of the MICAM Milano Digital Show which has just ended – including, for the first time, a delegation of Japanese companies, in addition to those from Italy, Spain and Brazil. Over 250 collections were uploaded, with a total of 15,000 products. The show had 4,000 visitors, a figure in line with the previous edition, indicating that being able to access MICAM’s product offering both during pre-event scouting and the end-of-season follow-up stage is still considered important.

Lastly, after the success of #strongertogether created by MICAM in 2020, followed by #restarttogether in September 2021, in February 2022 it will be the turn of #bettertogether, reinforcing the concept of belonging, of engaging with the event, and above all, the importance of in-person interactions in ensuring the success of one’s business.

You can find out more about which cookies we are using or switch them off in settings.

This website uses cookies so that we can provide you with the best user experience possible. Cookie information is stored in your browser and performs functions such as recognising you when you return to our website and helping our team to understand which sections of the website you find most interesting and useful.

Strictly Necessary Cookie should be enabled at all times so that we can save your preferences for cookie settings.

If you disable this cookie, we will not be able to save your preferences. This means that every time you visit this website you will need to enable or disable cookies again.

This website uses Google Analytics to collect anonymous information such as the number of visitors to the site, and the most popular pages.

Please enable Strictly Necessary Cookies first so that we can save your preferences!