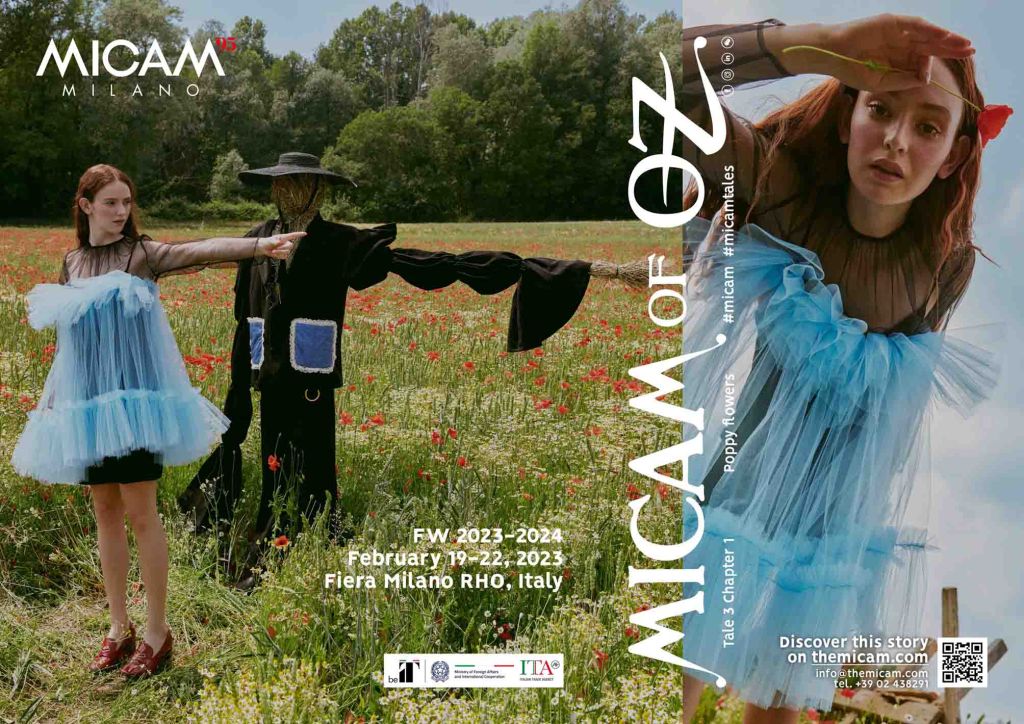 The #micamtales communication project continues with its third and final chapter. After “MICAM in Wonderland” and “MICAM Glass Slipper”, here comes “MICAM of OZ”: the voyage of a courageous young woman, accompanied by two whimsical companions, toward the Emerald Castle, in a symbolic odyssey that aims to represent the industry’s progress toward sustainability.

MICAM, indeed, chose this third fairy-tale in the series for its profound meaning, teaching us that self-confidence (that is, the ability to believe in yourself and your talents) is the true key to success.

MICAM and Assocalzaturifici President Giovanna Ceolini comments, “This fairy tale is also a metaphor for life in the world of business, made up of daily challenges both great and small, milestones to be achieved. Now more than ever, it’s tough to be in business: you need to keep up to date all the time, with great determination and an ethical perspective on important issues such as sustainability”.

Divided into two chapters, the fairy tale will accompany visitors through the next two editions of MICAM, representing key moments in the story with an ironic contemporary twist. The photos in the campaign were taken by Fabrizio Scarpa, while the short films were directed by Giuseppe Cardaci.

In February 2023, we will see the first chapter in the story, “Poppy flowers”, in which the heroine loses her little dog in a huge field of poppies. As she looks for him, she happens to upon a high fashion scarecrow, and two strange objects: an oiling can and a hat… both made of tin!

As usual, great care has been taken with the fashion story, involving some of today’s most promising talents in the creation of the looks. The heroine’s outfit in the first chapter is by ACT N° 1 (dress), A. BOCCA (shoes) and HALÌTE (bag), while the scarecrow’s outfit is by REAMEREI (suit), MATTIA CAPEZZANI (shoes) and MONTEGALLO ALICE CATENA (accessories). MICAM pays tribute to the world of creativity, which has the power to make us dream, and to promote the vanguard of Italian fashion through the work of the country’s most promising talents.

In this campaign, MICAM once again draws attention to the theme of sustainability, already underlined in recent editions with VCS: a registered trademark certifying the sustainability of footwear companies and their supply chains.

MICAM of Oz is intended to encourage footwear companies to proceed along the difficult, but important road to sustainability; a path full of surprises and magic that will accompany companies and dealers right through to the next edition.

You can find out more about which cookies we are using or switch them off in settings.

This website uses cookies so that we can provide you with the best user experience possible. Cookie information is stored in your browser and performs functions such as recognising you when you return to our website and helping our team to understand which sections of the website you find most interesting and useful.

Strictly Necessary Cookie should be enabled at all times so that we can save your preferences for cookie settings.

If you disable this cookie, we will not be able to save your preferences. This means that every time you visit this website you will need to enable or disable cookies again.

This website uses Google Analytics to collect anonymous information such as the number of visitors to the site, and the most popular pages.

Please enable Strictly Necessary Cookies first so that we can save your preferences!